The ceremony took place at 12:00 on campus, in MIUC´s verdant grounds. Graduands and guests were seated in the garden, under canopies waving in the wind. The ceremony began as all rose to the rousing tones of Guadeamus igitur, sung by tenor Pedro Barrientos, followed by the opening words of welcome by our Chief Academic Officer, Mirjana Stefanovic. Our partner Universities, the Moscow State Institute of International Relations (MGIMO), with whom we share a double-degree programme (B.A International Business and International Relations, and a 2-year M.A programme in International Relations), as well as our partner Singidunum University were welcomed in absentia. Our Dean, Dr. Beata Fröhlich, was then asked to officially commence the ceremony. This was followed by a speech by Marbella´s Mayoress, Mª Ángeles Muñoz Uriol, who reminded us of the strong ties uniting the city of Marbella and MIUC.

It was a day of bright memories and exciting hopes for the future, but it was also a day laced with poignancy as well, as our late founder, Predrag Jevremovic was remembered and honoured, with a minute of silence, a standing ovation, culminating with the granting of an honorary Ph.D degree by the Vice Chancellor of the University of West London Professor Peter John. Professor John spoke eloquent words of remembrance of his colleague and friend in a moving speech, before conferring the degree posthumously to his widow, Mirjana Jevremovic.

Dr. Nissim Levy was also honoured for his work and investment with UWL and MIUC, and was granted an honorary doctorate degree for his extraordinary commitment towards furthering the success of these institutions. 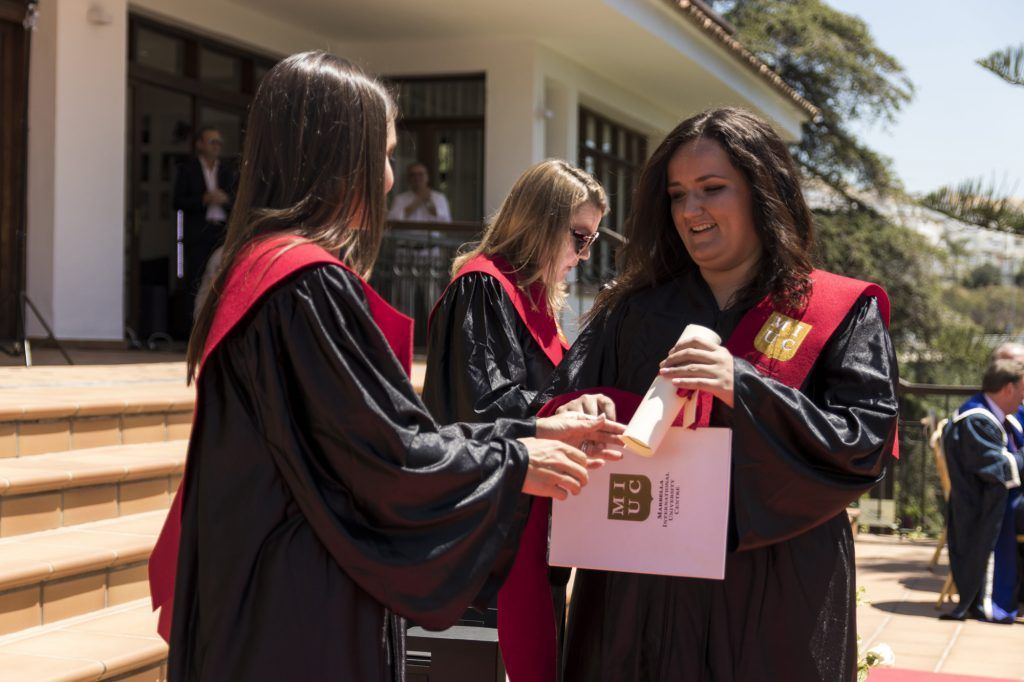 Dr. Blanco-Palencia was granted an award for Excellence in Teaching, for demonstrating passion in sharing knowledge and experience and her continuous commitment to excellence in teaching and mentoring colleagues and students. Dr. Blanco-Palencia responded with a touching speech reflecting on her time here at MIUC and the inspiration and values that motivate her. She shared with us her insights on holding space for others, for when we hold space for others, we walk alongside another person in whatever journey we are on, offering unconditional support, letting go of judgment and control. She added that it is virtually impossible to be a strong space holder unless we have others who hold space for us.

Dr. Blanco-Palencia reminded the students that education does not stop after graduating, exhorting them to remember that learning is a moral duty. 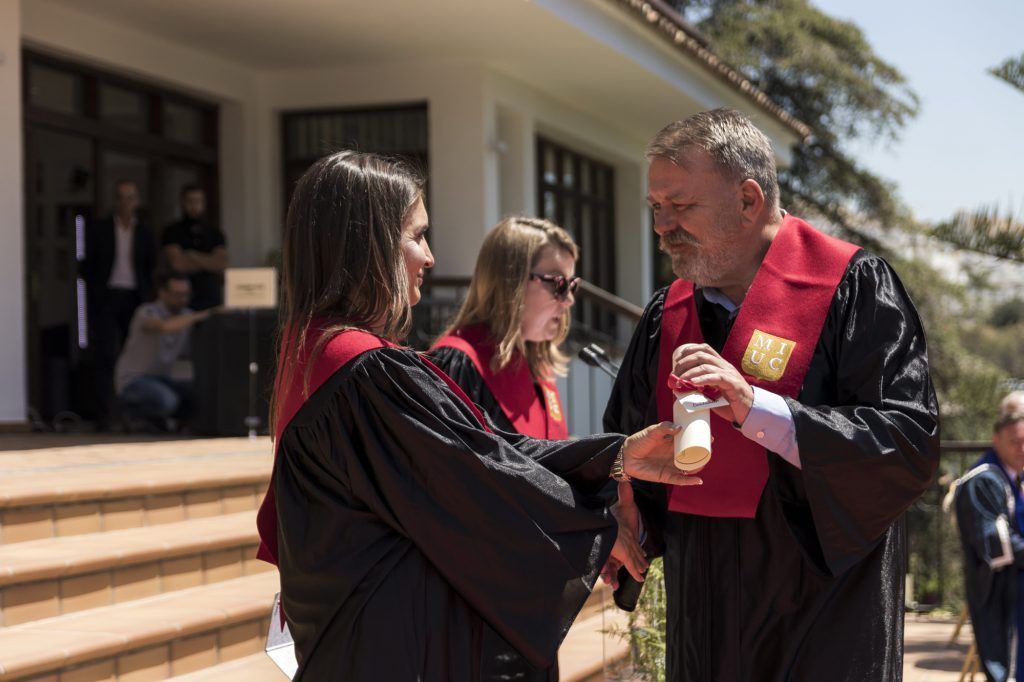 Dean Fröhlich offered her congratulations to the new graduates, honouring their families as well, by reminding them nobody makes it to graduation alone. She continued addressing the students, telling them of their great potential and possibilities awaiting them, as well as the great responsibility they bear, to seek compromise, and bring diversity to a common cause, whilst stating clearly “do not settle, as not all points of view are valid. Child soldiers and child labour is wrong, no matter how many countries or generations have practiced it. Climate change is real and this is the time we will either settle down, or completely wreck the planet. Fair does not mean soft. You will have to work hard to secure the interests and future of the generations to come. But here is the question: do you want to win an argument or do you actually want to change behaviours? “With malice toward none, and charity toward all.”. She added: “There is no shortage of cynicism and selfishness in the world. Have some ethics, God knows the world needs some ethics. Don’t cut corners. Don’t lie. Cheating for whatever reason and in any field is wrong and is at best a temporary solution to a greater problem. Chose hard right over easy wrong. Be proud of yourself and stand for something. Your family, your co-workers and you will appreciate it as you go on to be the much better leader. Money will come, trust me, but no amount of money in the world will help you sleep well at night if you haven’t been legit. Will your world change you, or will you change your world?”

Dean Fröhlich concluded her address with the final exhortation to the graduates: “I am optimistic about the future because of you. And while I am sad to bid you farewell, I take solace in knowing that you are leaving here to make the world a better place. I want to quote a short poem by the English poet William Ernest Henley whom I think about every day as I open the door to leave for work, I want you to think about it too: “”I am the master of my fate: I am the captain of my soul””. Congratulations! Now go and change the world.”

The Graduates´ Vote of Thanks was presented by B.A Chiara Georgina Lageveen, and B.A Sofia Martin Garoña.

Chief Academic Officer Mirjana Stefanovic read the charge to the class of 2018, before calling for a close of the ceremony with the recessional.

The eventful day was followed by a cocktail on campus, with a dinner for the graduates and their families, friends and faculty at the well-known social club KITCH. 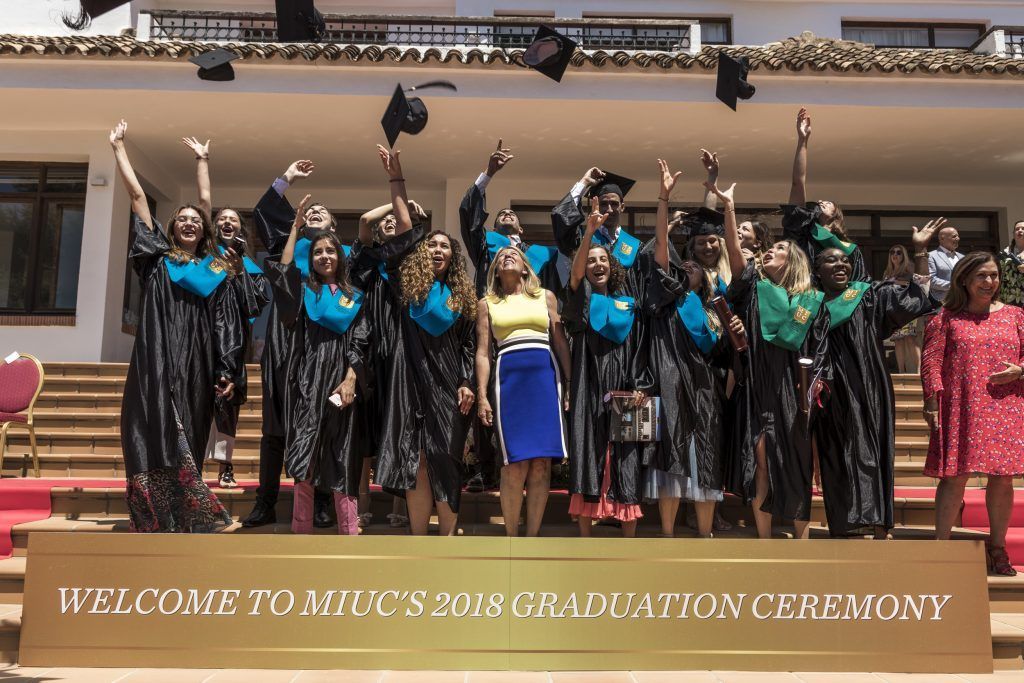